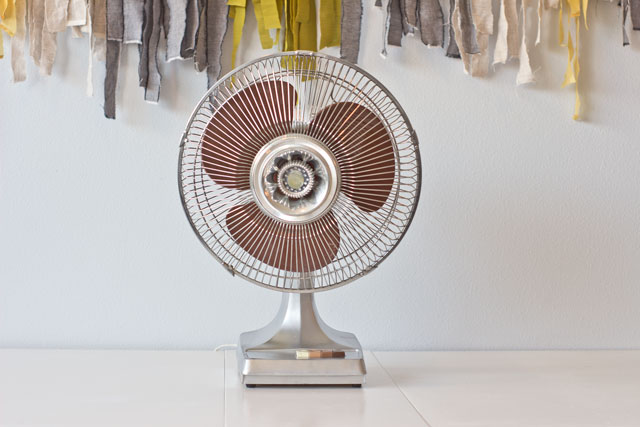 Living in Seattle during the summer is great, except for one thing…air conditioning is practically non-existent.  Being a Southwest native, I would have never thought people could survive without AC, but it’s true.  Everyone just uses fans in the summer months.  Last year, Joey and I made the mistake of waiting until July to buy a fan.  That was a very poor choice, because once the temperature gets above 70, the fans fly off the shelves.  This year, I was determined not to make the same mistake, so I bought a fan at Goodwill well in advance of the summer months.  The fan I bought was in okay shape, but it needed some cosmetic improvements.  It’s sort of hard to tell from the picture below, but the white base and the faux wood panel around the buttons looked very cheap.  I decided the best approach was to paint the body a metallic silver color. 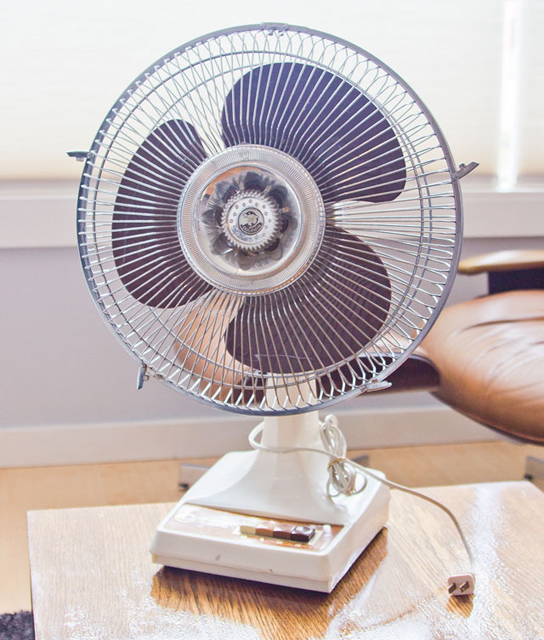 I started by taking the fan apart and wiping it down with rags.  Then I taped off the parts that I didn’t want to get painted. 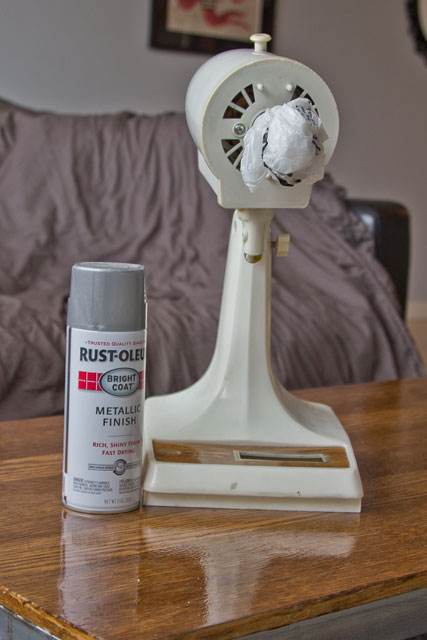 I took the fan body outside and gave it a light coat of spray paint.  Since we don’t have a condo, I had to do the painting in the parking lot next door.  Luckily the weather was decent, and I didn’t have to worry about rain. 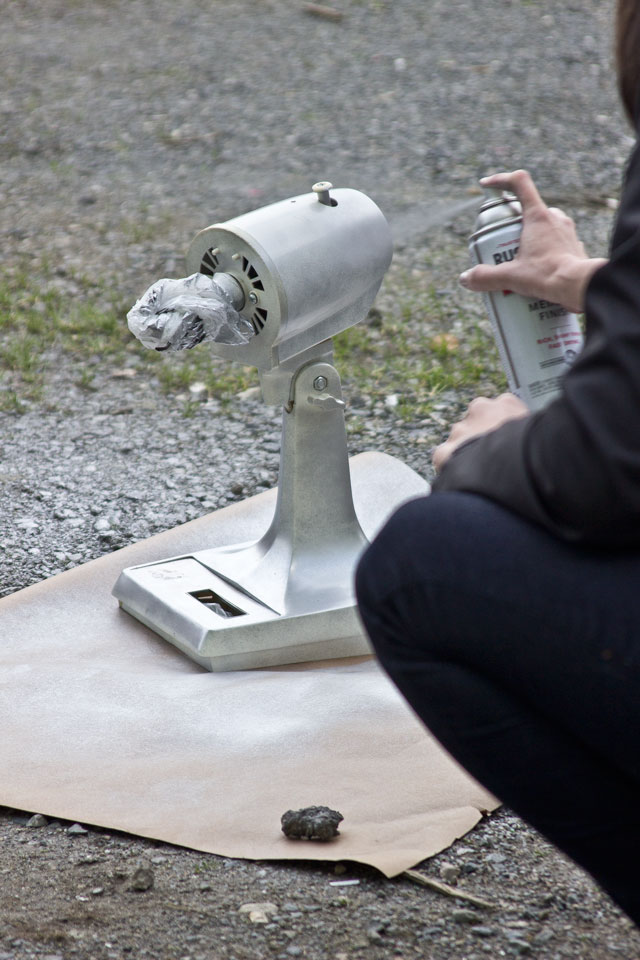 I let the paint dry, and then gave it a second coat.  While waiting between coats, I hung out in the parking lot and soaked up the sunshine, which I’m sure my neighbors loved.  Who doesn’t want to see a crazy woman armed with spray paint and a disassembled fan lurking outside their window? 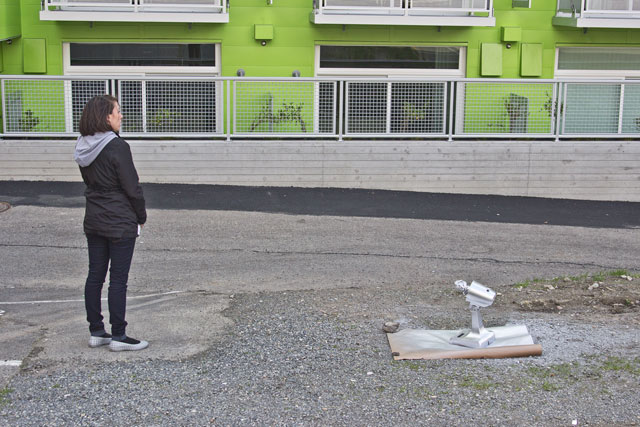 Once the paint was completely dry, I brought the fan base back inside and reassembled all of the parts. 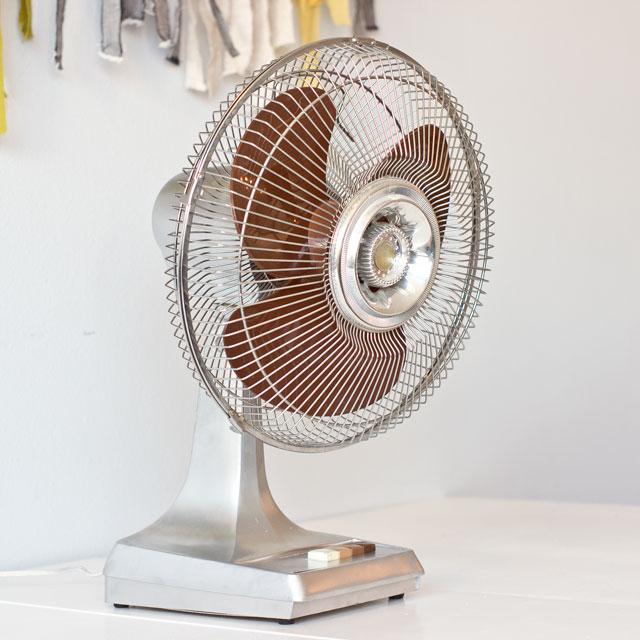 Originally, the middle of the fan grate had a dolphin emblem, which looked really cheesy.  I thought about painting it, but I decided to just turn it over because I really like the backside.  It has dried glue and rust on it, which gives it a very industrial appearance. 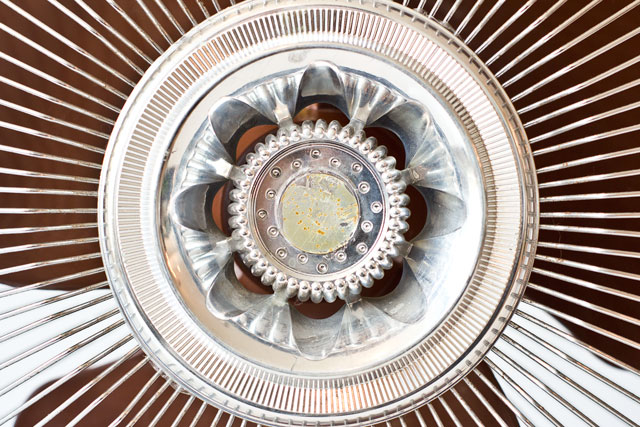 I kept the buttons and fan blades their original color.  I think it gives a nice contrast to the metallic fan body. 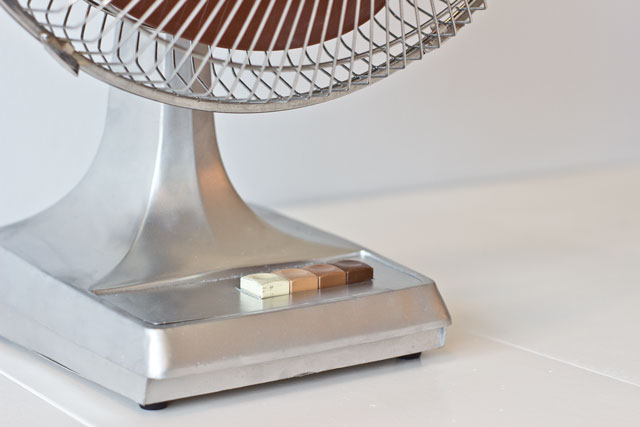 Right now the fan is in our guest bedroom, but I might put it in the living room once the weather gets warmer. 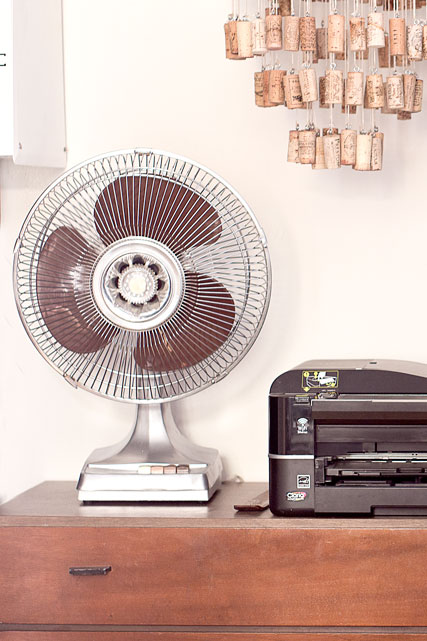 With a fan this stylish, who needs air conditioning?  Okay, okay, okay, I suppose anyone living in state where the temperature rises above 80 degrees probably prefers air conditioning to a dinky fan, but for me, this fan is perfect.