When Joey and I were looking at homes to buy, we looked at SO MANY HOMES! Honestly, Seattle’s housing market is out of control, and we never thought we would be able to afford anything that wasn’t a total dump. And we both have well paying jobs in tech, which just goes to show how ridiculously unafforadable this city has become. But we lucked out when Joey happened to stumble upon our  current home. The curb appeal was questionable, but we knew we could make it work.  Three years later, and I’m happy to say, we have finally turned a corner. The biggest improvement (beyond some super landscaping) was the installation of carriage doors.  I became obsessed with installing carriage garage doors when our neighbor, a local historical expert, gave us photos of our house from different eras. This photo from the 1920s, shows what our house looked like soon after it was built. 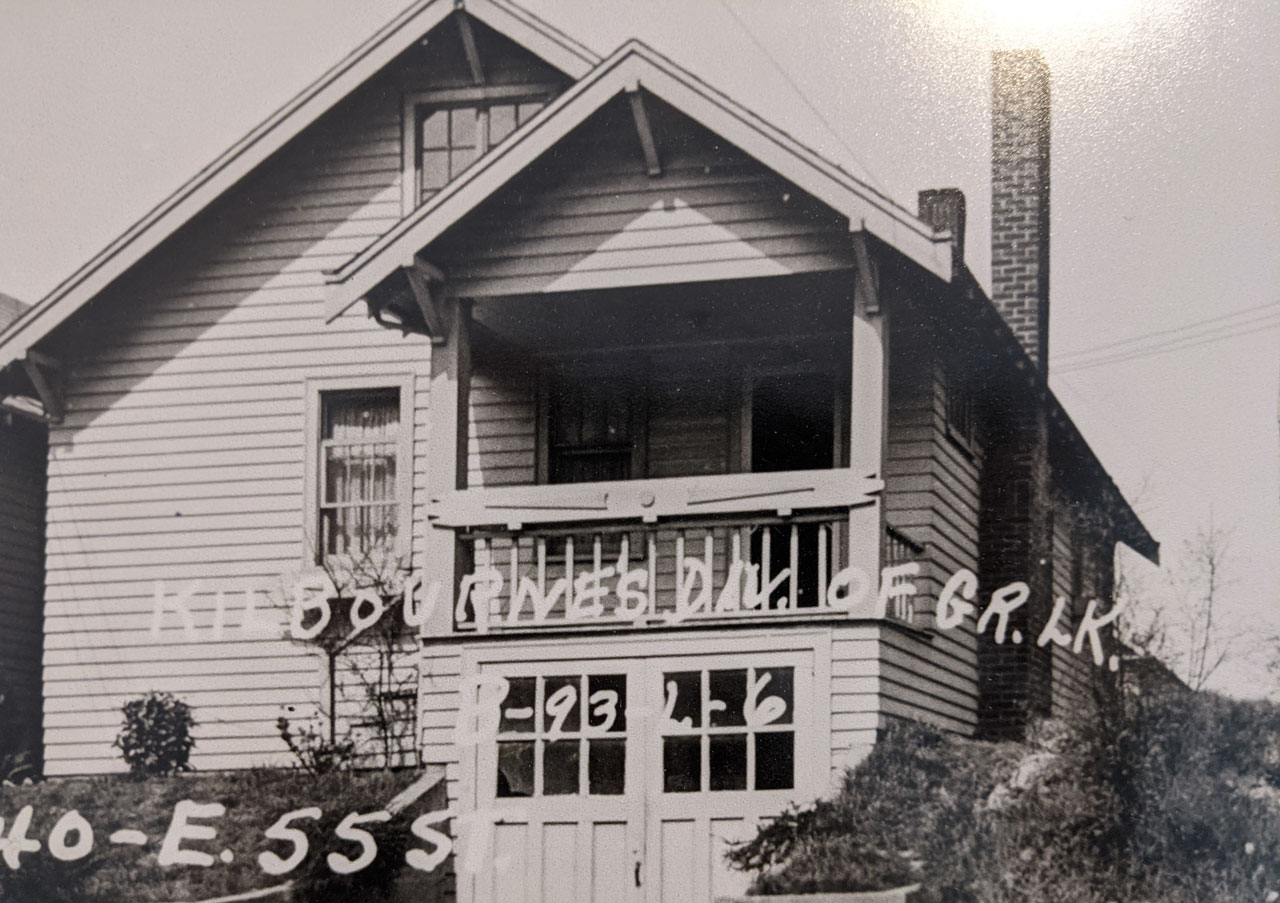 Swoon worthy, for sure! And I’m a sucker for historical accuracy, so I got this notion that we had to replace our overhang garage door. A strange thing about Seattle is that nobody parks their car in their garage. Literally nobody… so having carriage doors wasn’t that ridiculous of an idea, since we never parked in the garage to start with. I searched high and low for the perfect doors. Always on the lookout for a deal, I found some at a salvage store for $800.  I was super pumped and bought them without really considering logistics.  So we brought them home and they sat in our garage for a year or so until I found someone to install them.  But turns out they had lead paint and totally didn’t fit our garage opening… whoops.  And the cost to install them was more expensive than buying new doors from a local store (Frank Lumber the Door Store). So I swallowed the cost and commissioned new doors.  All in, this was a very expensive project (like probably around $10K), which is very much against my normal ethos; however, I was so determined to improve our curb appeal that I honestly didn’t care.  And I’m happy that I didn’t cheap out.  They look amazing!! 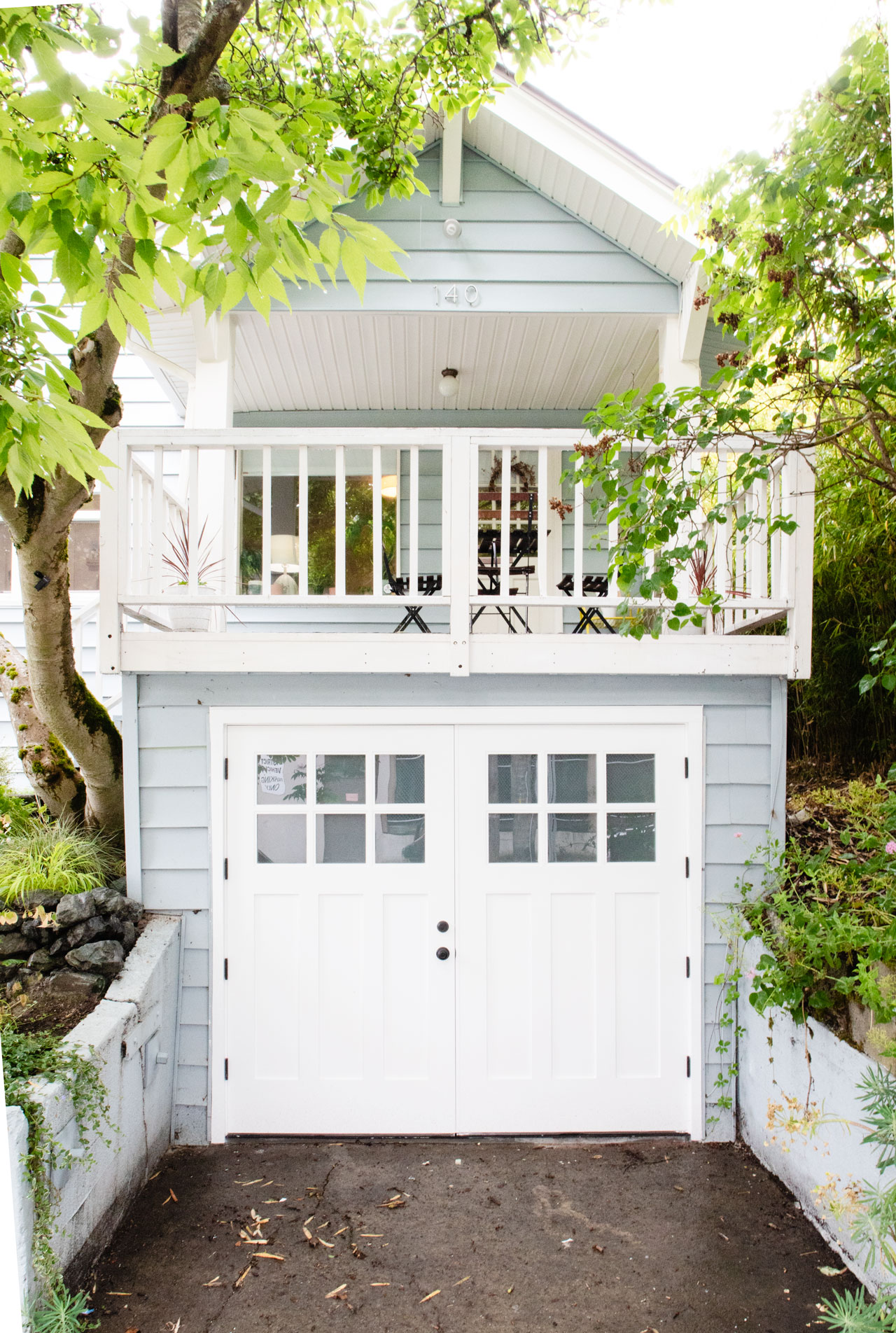 I mean, look at them.  Instant curb appeal. I do have to call out that we also had amazing landscaping installed, and we had to reinforce our retaining wall due to the magnolia tree’s pressure, which was pushing the wall and garage away from the rest of the house! Eeek. We also had to reframe part of the garage which was leaning.  So yeah, this was a multi-year project. But anways, you’ll see why it was necessary when I show this photo that I found on Google Street View from 2007. 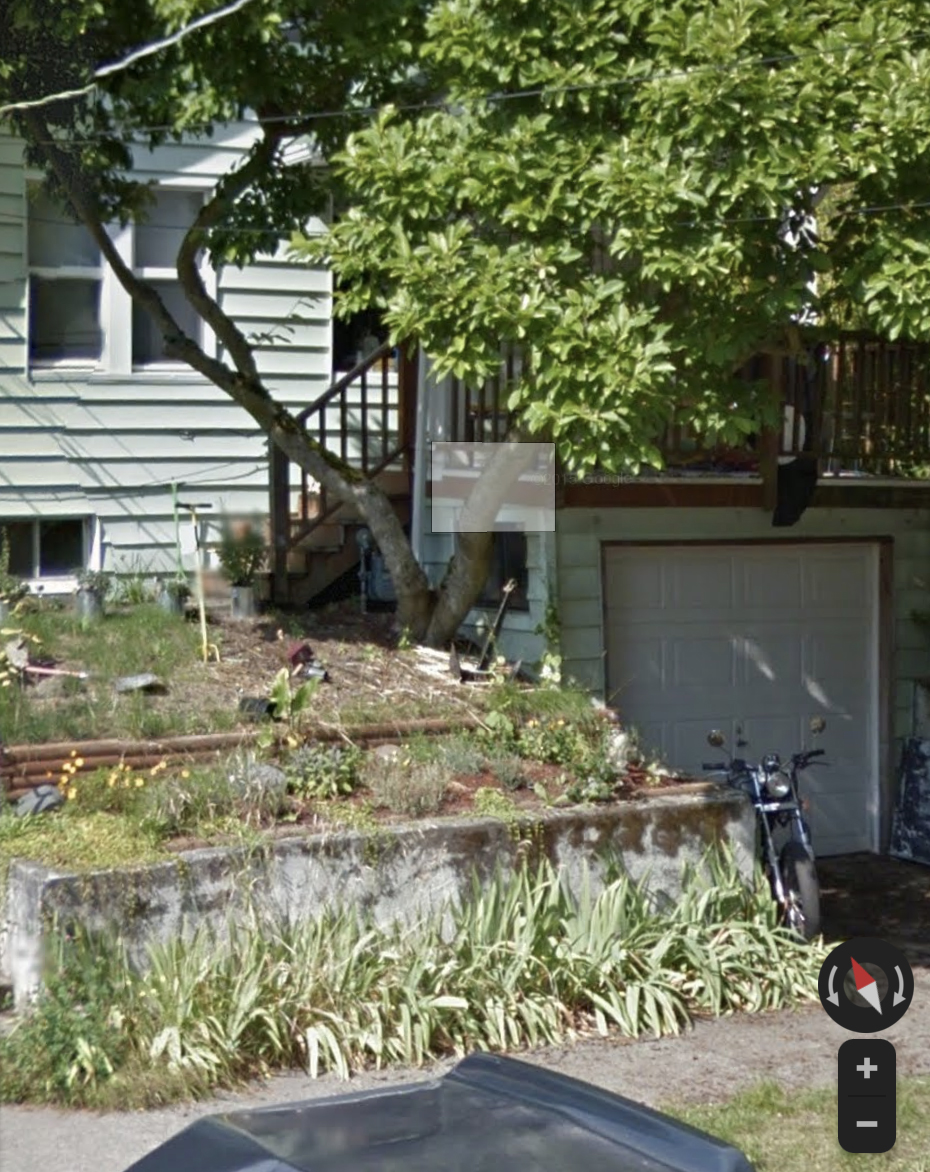 Barf! The house was a rental for over 20 years, and the landlord was pretty much a slumlord, so the house was totally trashed. Before he sold it, he did some “cosmetic” fixes, which led to the below picture, from right after we bought it. 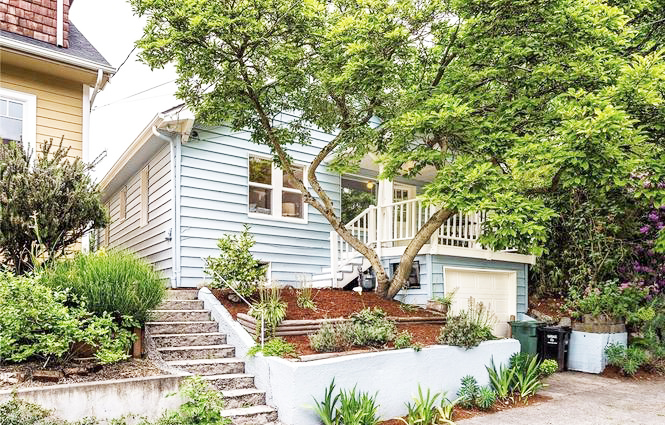 Not that bad… but it’s also nothing to write home about.  But now look at this beauty. 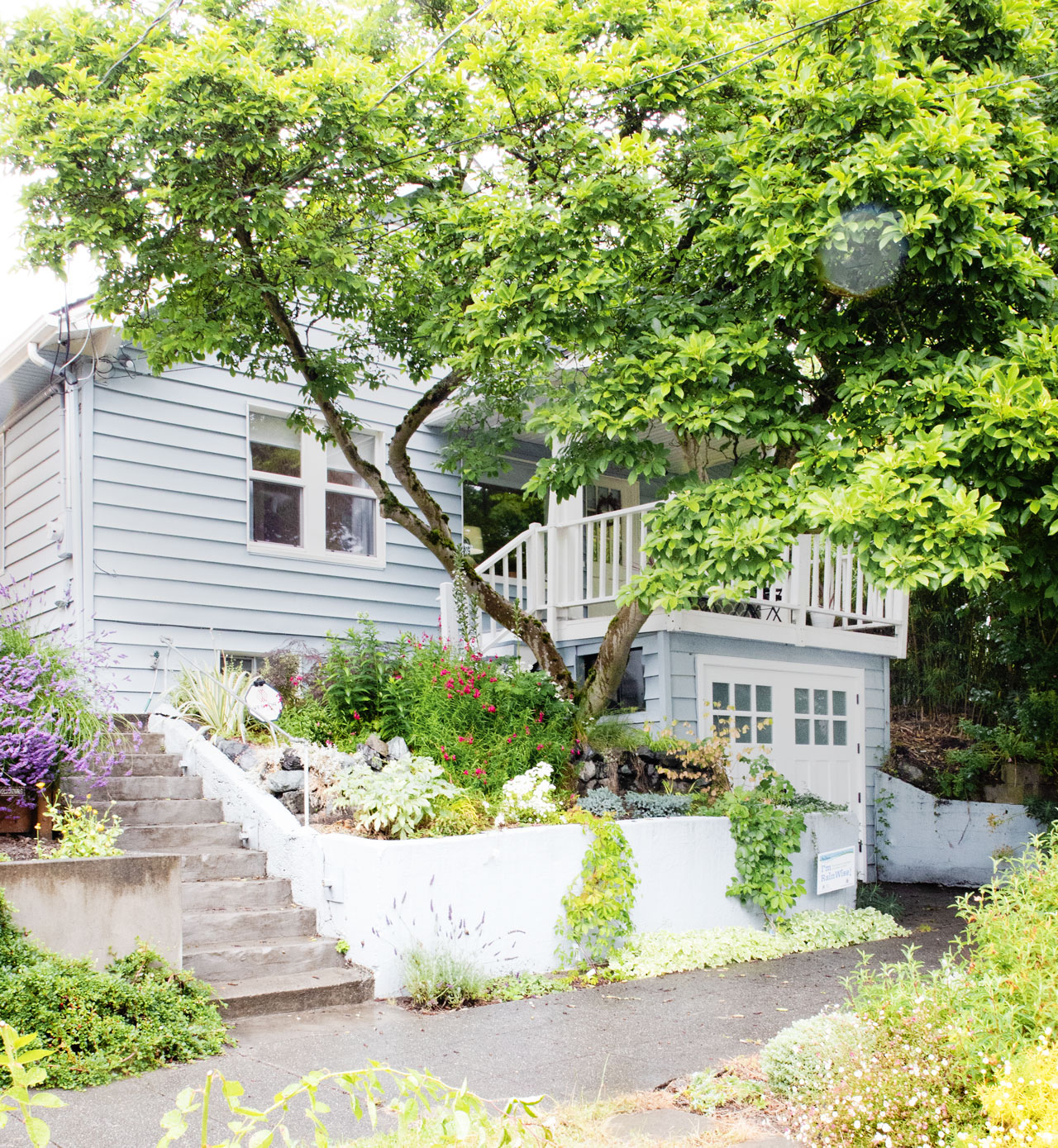 Yes!! I am so happy with the progress. We still have some big plans for the exterior. Long term, we want to paint the house darker, because baby blue is so not my color. But for now, I’m pretty content. 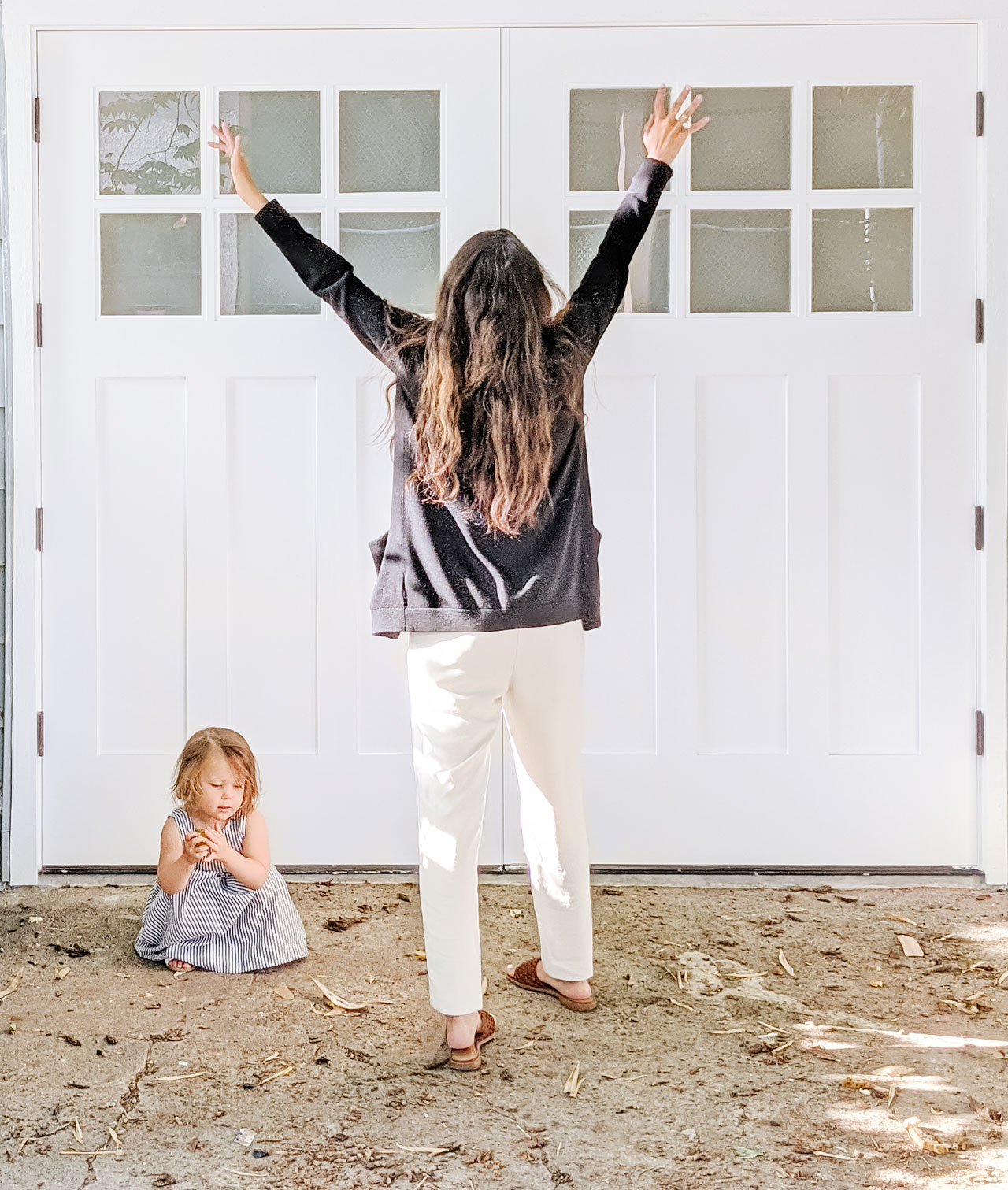