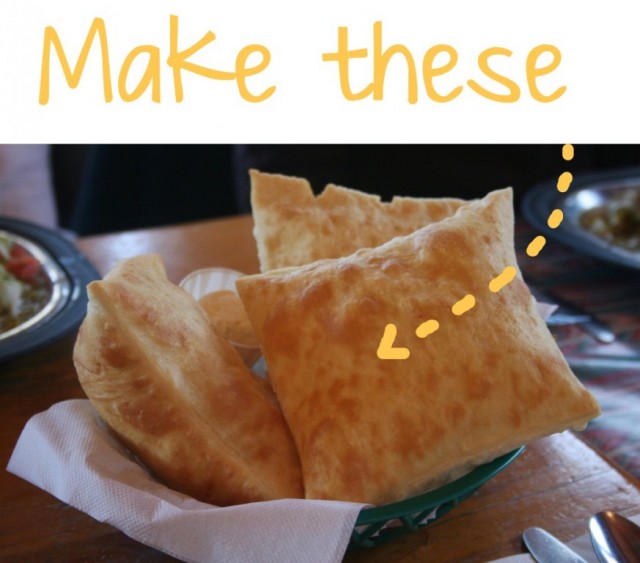 Growing up in New Mexico, I took sopapillas for granted.  I just assumed they were as common as chips and salsa and that I would have an endless supply of sopapillas available for my consumption whenever I desired. I was terribly mistaken.  Now that I’m living 1,456 miles away from Albuquerque, I have discovered that sopapillas are quite rare.  I have searched high and low and have yet to find a single Seattle restaurant that makes these delightful treats, which is why I had to take matters into my own hands and conduct a culinary experiment in the kitchen.  Anyone who knows me well will vouch that the kitchen is not my domain… I am truly an awful cook; however, I managed to craft some sopapillas that actually taste pretty good.  Below is the recipe.  It is adapted from this website.

Mix the dry ingredients together well.  Then cut in the lard. Next, add the soy milk into the mixture.   Mix the dough until it creates a solid mass, and then begin kneading the mixture.  Once the dough is soft and no longer sticky, cover it and let it sit for 15 minutes.  After 15 minutes, roll the dough onto a well floured board.  The rolled out dough should be 1/8″ thick.  Cut the dough into squares or triangles of your desired size.  Next, heat oil in a deep frying pan.  When the oil is very hot, begin adding the sopapillas.  They should begin puffing up after a few seconds.  Turn the sopapilla over to ensure both sides get lightly browned.  Once the sopapillas are a golden brown, put them on a paper towel to dry. After the sopapillas have cooled a little bit, you should drizzle your sopapilla with honey.  Next comes the best part… eat your sopapilla!

P.S. please don’t act like a fool and sprinkle your sopapilla with powdered sugar.  That is something restaurants do in Arizona, but definitely not  in New Mexico.  I had to severely scold Joey when he tried to pull out the sugar.