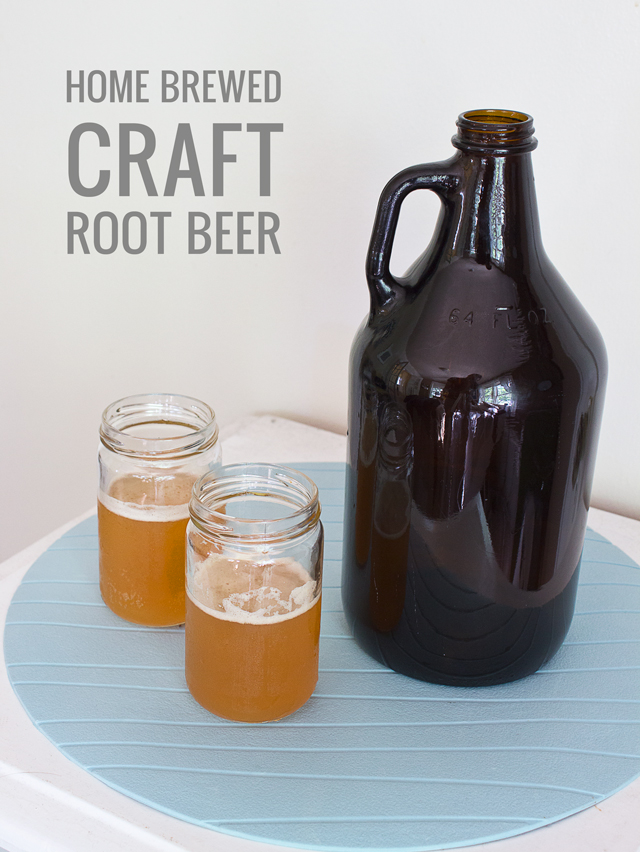 As a novice in the kitchen, the idea of beverage making is something that seems less intimidating and is an enjoyable extension of brewing tea or mixing a drink. Brewing your own root beer is one of those areas where you can put your own signature on an old fashioned tradition that took off in America. Root beer has all sorts of associations, whether you think of cowboys boiling tree bark in the wild west, or pharmacist Charles Hires’ early concoction of 16 wild roots and berries, or the popular drink used for an ice cream float in diners of the 1950s. [Impatient people, check out the recipe at the end of the post]

Root beer is a small beer, a low- to no-alcohol drink that fits into the group of soda, pop, or soft drinks. Brewers of root beer sprang up and advanced in prominence around the 1920s as a legal drink during the prohibition. Players like IBC, Barq’s, Hires, and A&W were some of the early ones that still have names in today’s society, although it might be interesting to note that Dr Pepper Snapple Group now own and dictate the current taste of most rootbeers on the grocery shelves.

There are many roots in the world and hundreds of other popular ingredients that work well in the family of root beer and small beers. Back in the day, sassafras and sarsaparilla were among the top flavors used in root beer. Today, the taste most familiar to mainstream rootbeer is wintergreen. This is because in the 1960s, sassafras was banned by the FDA after discovering safrole, an oil that is known to be carcinogenic in rats in high doses. However, home-brewers continue to use it–as basil, cinnamon, and nutmeg all contain safrole as well. When used in small quantities, it is no different than sitting next to a campfire and breathing some of the “carcinogenic” smoke. 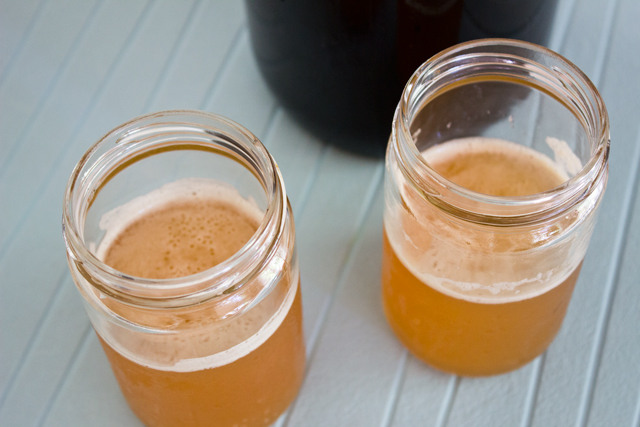 There are other recipes which are very informative, but use pre-made extract which is less inventive in tweaking the core flavor profile. The first batch I made tasted more like a craft ginger ale because of the yeasty tartness, but I’ll be updating the recipe as I homebrew more batches. 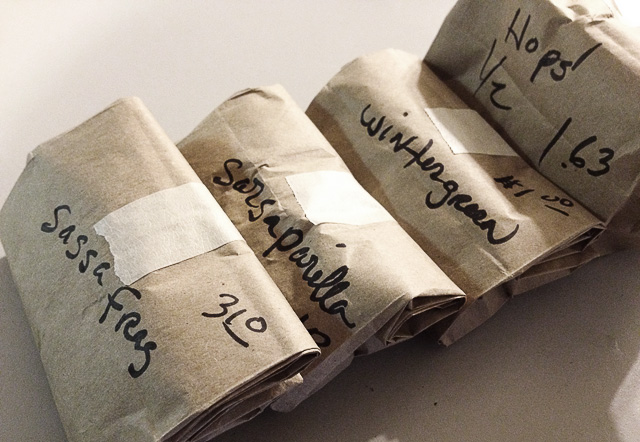 I did not use the below ingredients in my first brew, but you can add or substitute these in your wort. The amounts are a starting point.

Bring water to a boil. Simmer ingredients for 1 hour. Hops can be added anytime throughout the cooking process. Check out the temperature effects on the flavor of hop tea. Let wort cool to under 105 degrees F. Strain, and funnel into your bottle.

Add your extracts, sugars, and liquids to the bottle. Shake up all the ingredients until dissolved.

Let the yeast sit in the warm water for 15 minutes. Afterwards, add this to the bottle, then top off the bottle with clean water until there’s only an inch of space from the cap. The less oxygen in there, the less oxidation (leading to off flavors and smells). But leave just a bit of room for  a foamy head (just like beer) and for fizzing when opening.

Be still and patient:

Let the yeast ferment into soda in a dark place. Or if you are lazy, cover the bottles with your leftover laundry. Wait anywhere from 4 hours to a week, depending on the temperature and complexity of the nutrients. Warm weather indoors will speed up the process compared to a cold house without a heater running. Typical time will be 1-3 days.

When the bottle doesn’t flex under firm pressure, it is ready to permanently toss into a refrigerator to inhibit further carbonation. Any lollygagging after the bottle stops giving when squeezed will only increase your risk of over-carbonation and exploding fluids. After refrigerated, the bottle will need some pressure released. Slowly loosen the cap until a faint noise lets you know the compressed gas is escaping. Let the craft root beer sit in the fridge with the slightly loosened cap. You can drink 12-24 after it has cooled. Be careful not to unscrew the cap too fast on first opening, as you might get overflowing root-beer (after all, it is carbonated soda).

* Tweaking the sugar sources will have a direct impact on the flavor. Experiment with brown sugar, 2/3 c agave nectar, honey, or other sugary substances. Sweet fruit juice can also be substituted for water and part of the sugar contents. Some sugar (glucose, fructose, dextrose, etc) needs to be present for the yeast to work its magic, but you can replace part of the sugar with stevia or other sugar alternative. If you are looking for a sugar-free alternative, you could skip the yeast and use pre-made or force carbonated water, but use a lower quantity of sugar substitute.

The following sites have more rootin-tootin recipes and more anecdotes about the drink.