The kitchen is one of the areas in the house that I haven’t really shared. I’ve always intended to, but I never got around to photographing it.  However, we just had our back door replaced with an outswing, full lite door, and I love it so much that I decided it was picture worthy. 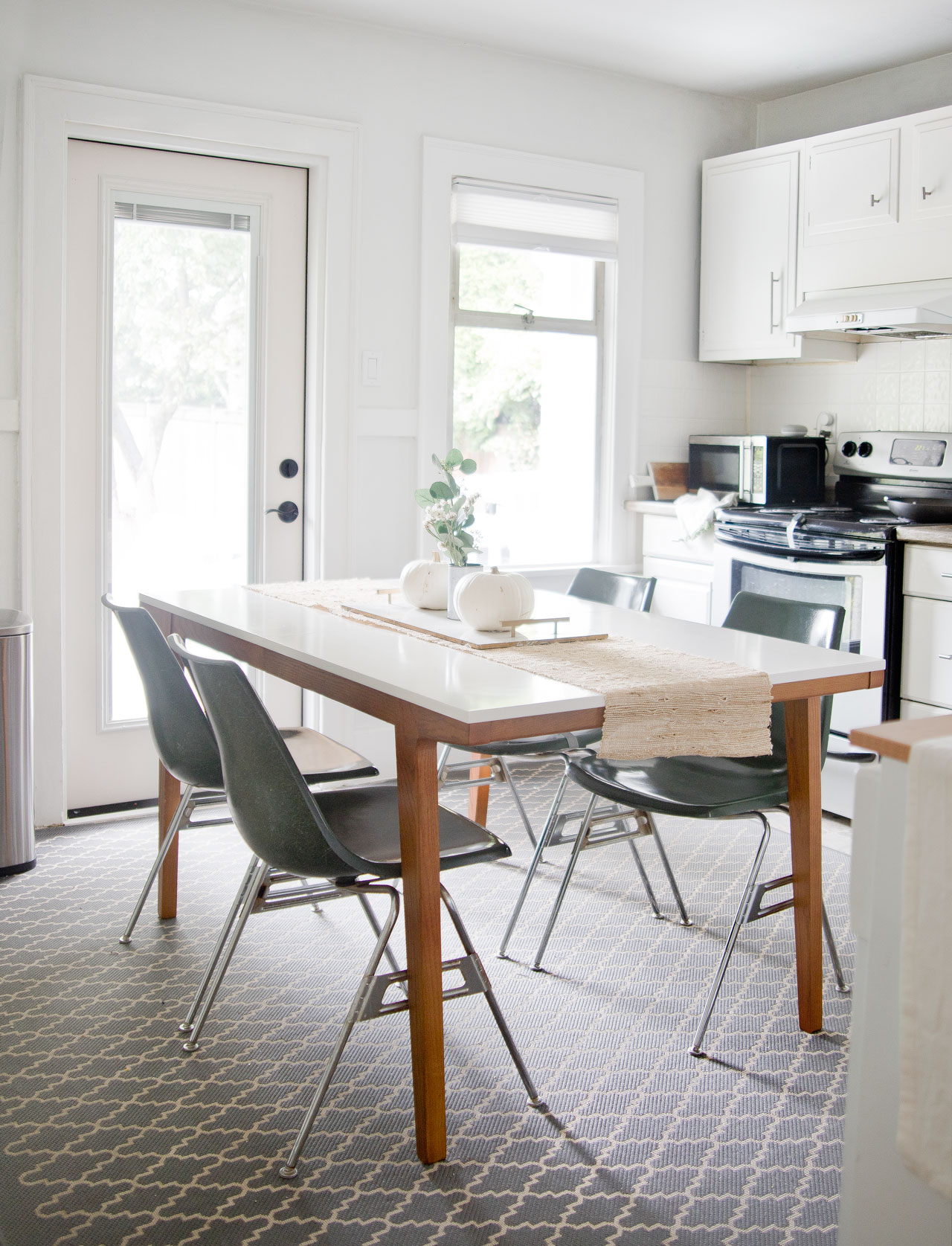 Saying it’s picture worthy is no small feat because this room started out as one of my least favorites. It was so blah. I hated everything – the wall color, the countertops, the floor. 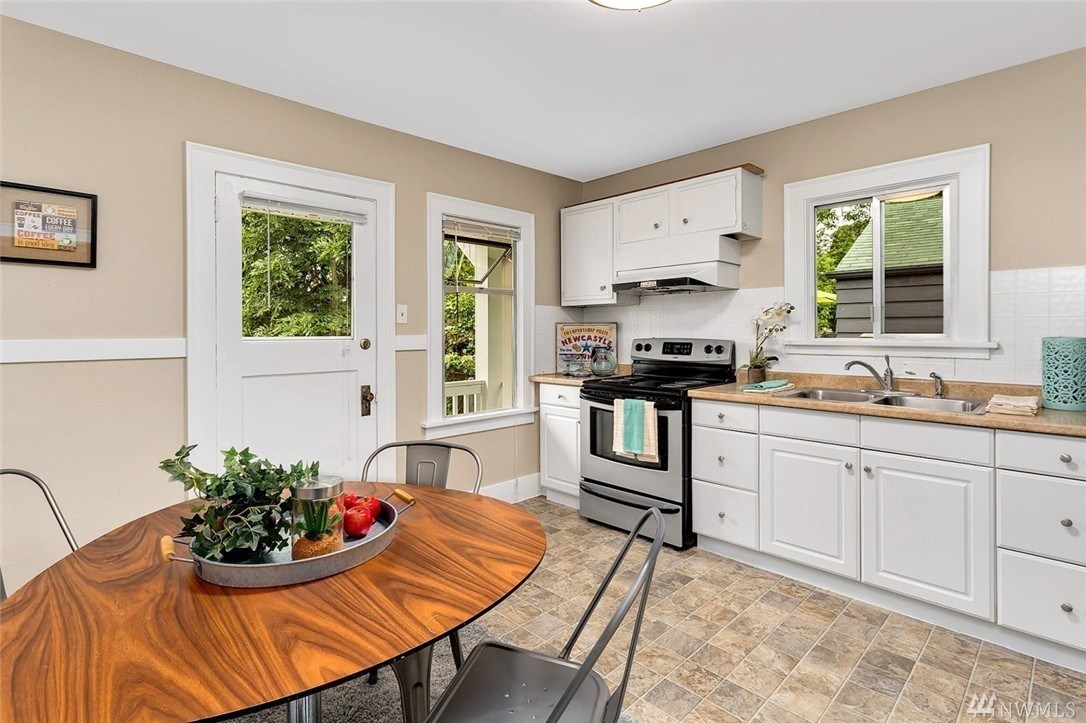 So we’ve slowly been making updates. After painting the walls white, the first thing we did was put a giant rug over the awful vinyl tile. It’s an indoor/outdoor rug, so it’s super easy to clean. Soon after that, we got our diy game face on and covered the countertops with concrete. I had always thought I would do a how-to post on the process, but I honestly just got too far behind (having a baby will do that to you), and now I can’t find any of the photos I took while the work was in progress. Basically you can find any concrete countertop diy tutorial on Pinterest and it will probably work. Two years later, the counters are still holding up, but we definitely want to replace them when we do a more extensive reno. In the photo below, you can also see the open shelves that we built a few months ago. They are fantastic. I know open shelves are controversial, but I love them for displaying nicer dinnerware. 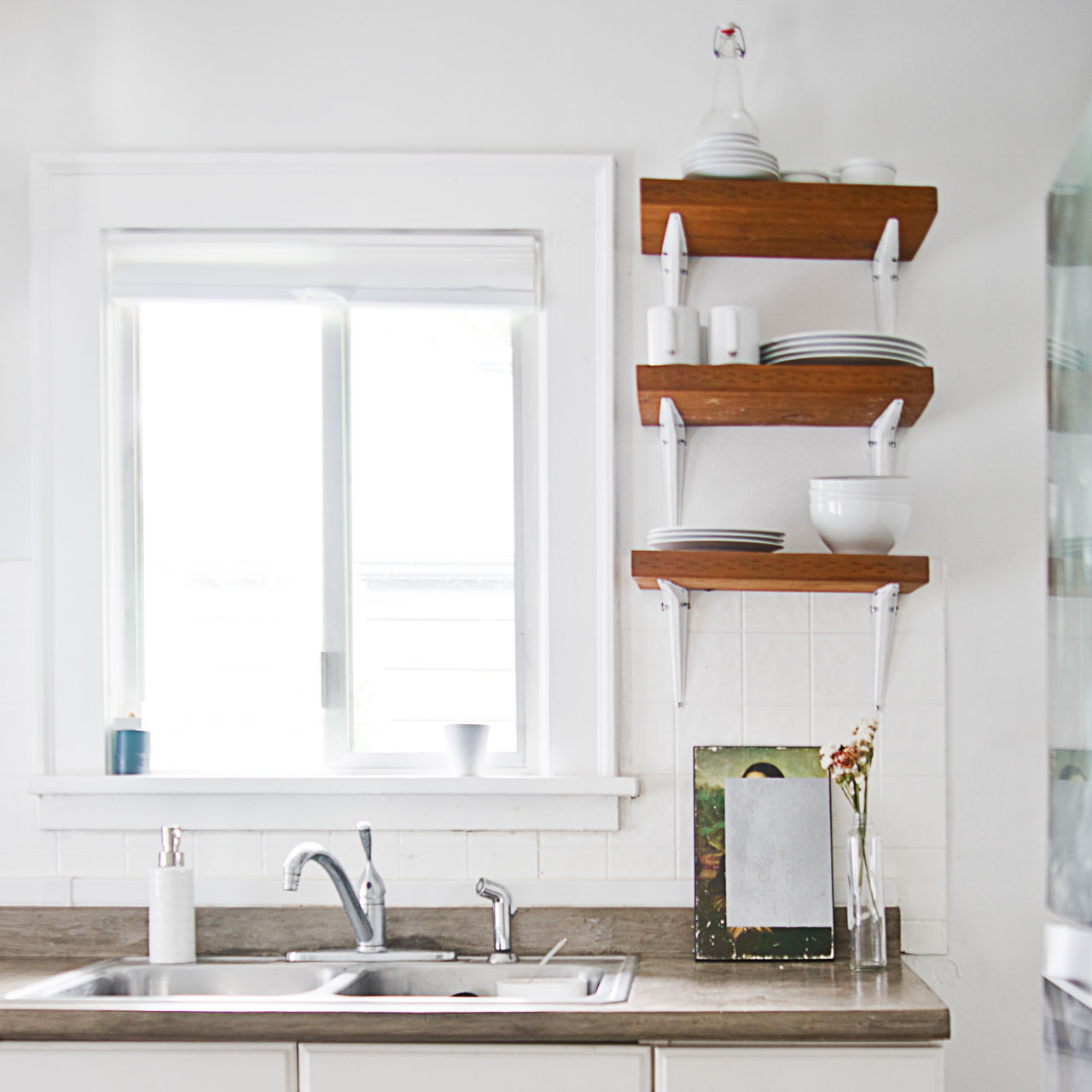 One thing you might notice from the before photo is that there isn’t a dishwasher. I thought I was okay with that, but once I started washing bottles, I had a change of heart. So I found a portable dishwasher on Craigslist. It’s not beautiful, but it gets the job done. I just roll it over when I need to do the dishes, hook it up, and voila! 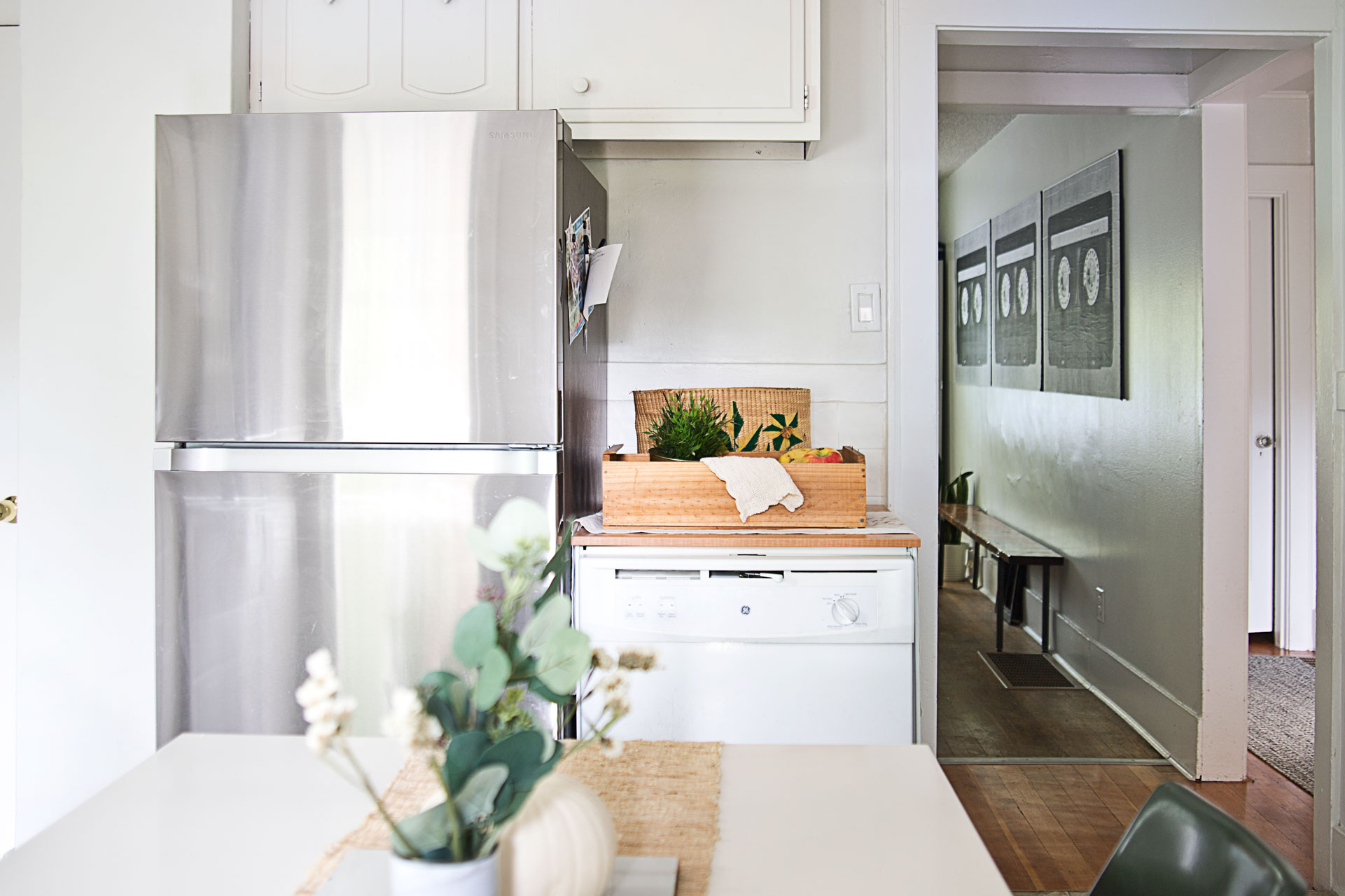 Besides the back door, one of the most recent updates we’ve made is swapping out our old table with this beautiful table from West Elm. It pairs well with the vintage green chairs, which are from Goodwill and were under $5 a pop. Insane, right? That’s how I justified spending so much on the table. In the corner, you see our pantry, which is actually a wardrobe from ikea. One day, I would love to have an actual pantry, but until now, this works just fine. 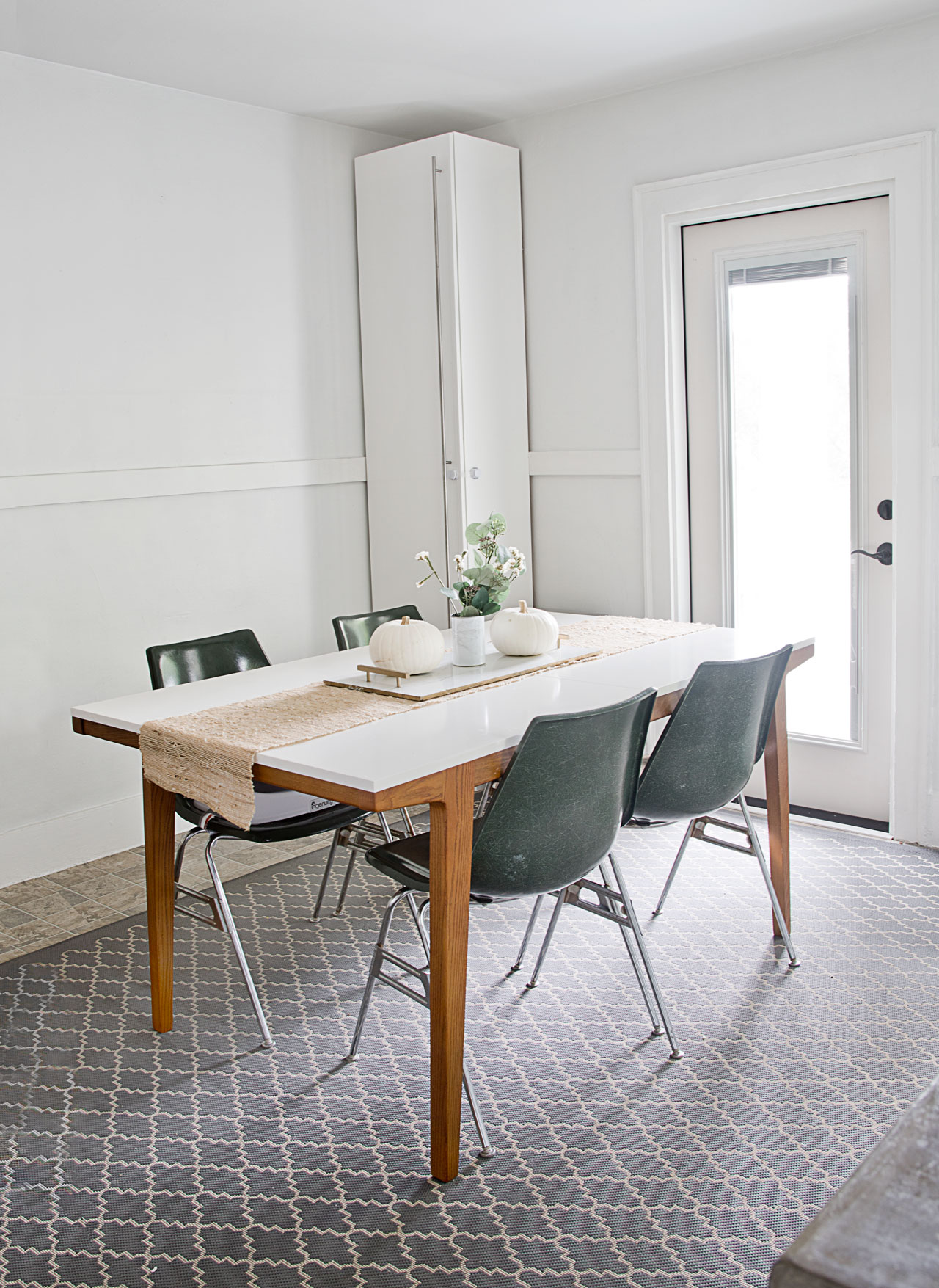 So there you have it, our in-progress kitchen reno. It’s far from perfect, but it’s a million times better than it was when we moved in. I’ll leave you with this fall themed centerpiece.  The runner and faux greenery are from Target, the pumpkins are from the grocery store, the vase is actually a can that I covered in marble contact paper, and the marble tray is a large piece of tile that we got at a Zero Landfill event. We added the handles to turn it into a decorative tray. Side note: Zero Landfill is one of my favorite events in Seattle. It’s where a bunch of interior designers donate old samples and it’s open to the public.  It’s basically heaven for cheap peeps like Joey and me. 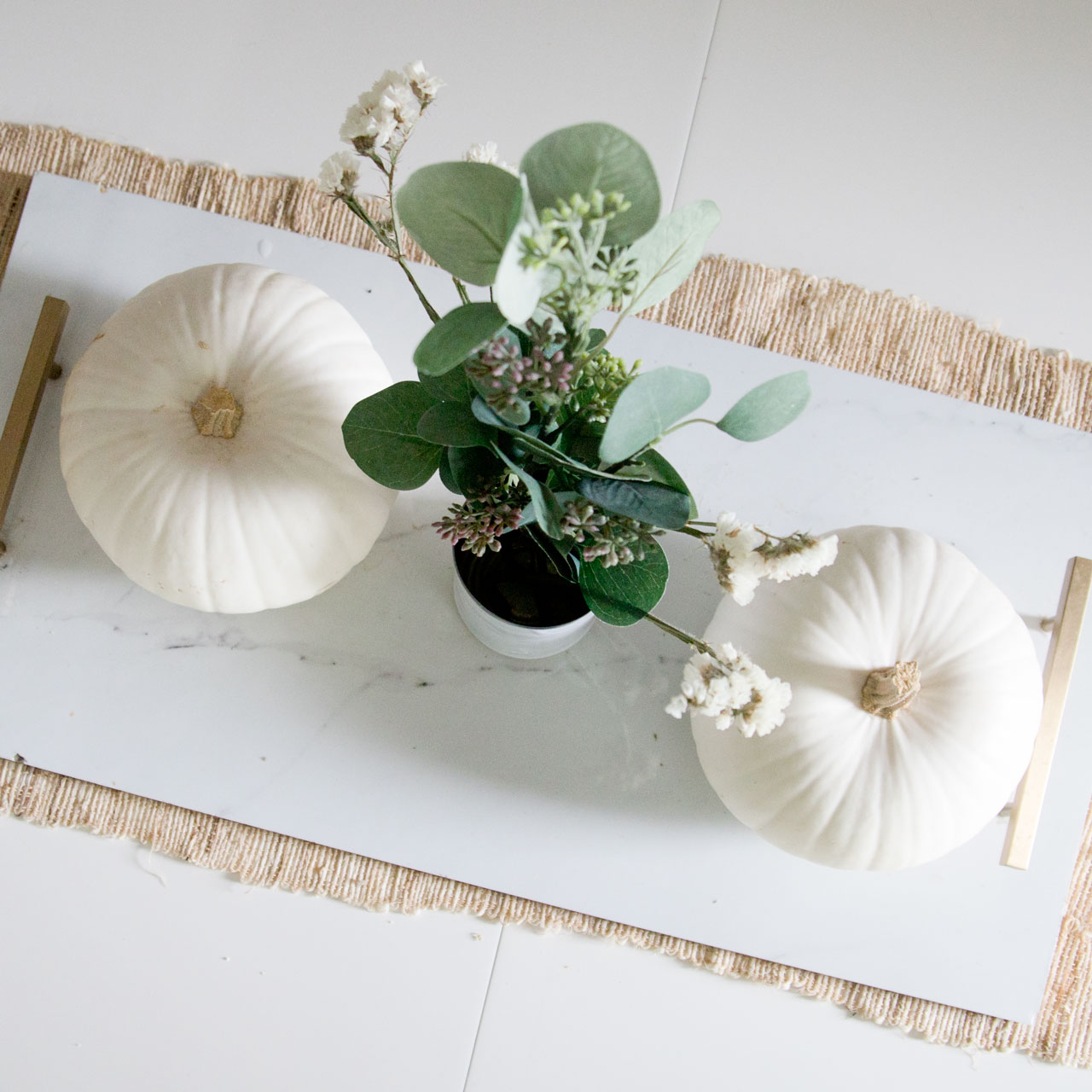 1Pingbacks & Trackbacks on Kitchen Before and After